Special challenges at this site include:

Technologies applied to optimize and improve remedial effectiveness include:

The site is a former electronics manufacturing facility that used TCE for glass cleaning. An estimated 1,365 gallons of TCE were lost between construction in 1991 and discovery of the release in 1996. TCE use was terminated in 2000. The site is under new ownership and is now used for warehouse and light industrial purposes. The facility and source area lie near the top of a hill, with limited access to the plume area due to the steep slope, a major highway, and a heavily forested area.

The site is underlain by saprolite that grades into competent bedrock. The saprolite is heavily oxidized, relatively low permeability silt, sand, and clay, with varying degrees of relict bedrock structures and quartz veining. The transition from saprolite to competent rock is a partially weathered rock zone that is visually similar to the saprolite but marked by greater density and more abundant rock fragments. The upper bedrock exhibits varying degrees of fracturing and weathered zones in a matrix of mica schist and gneiss, feldspar gneiss, and granite. The depth to rock ranges from approximately 90 feet below grade in the source area, to as shallow as 6 feet in the plume area.

The water table occurs in both saprolite and in bedrock where depth to rock is relatively shallow. Depth to groundwater ranges from approximately 55 feet below grade in the source area to as shallow as approximately 5 feet in the plume area. Slug and permeability tests yield an average hydraulic conductivity of 3.0 x 10-4 fpm in the saprolite and 1.5 x 10-3 fpm in the partially-weathered rock. Bedrock transmissivity estimates from yield tests range from 1.5 x 10-3 ft2/min to 5.5 x 10-2 ft2/min. The piezometric surface and groundwater VOC isoconcentration maps indicate a partially radial flow pattern from the source area between a northwest bearing and a southern bearing, consistent with the hill topography. Downgradient of the source area, the groundwater flow direction is primarily to the south and southwest following the regional flow regime towards a local river adjacent to the site.

The primary contaminant found at the site is TCE, at concentrations historically ranging as high as 1,200 mg/L in the source area. Cis-1,2-dichloroethene and vinyl chloride are also present at maximum concentrations as high as 15 mg/L and 0.53 mg/L, respectively. In general, little TCE degradation is occurring, and both cis-1,2-dichloroethene and vinyl chloride are often not detectable. Overall plume area is approximately 15 acres, with a maximum length (measured along the axis of highest TCE concentration) of approximately 1,000 feet.

Site characterization was complicated by the two-zone aquifer system, with flow in both the relatively low-permeability saprolite and partially-weathered rock, and in fractured rock. Objectives included refining potential transport pathways and confirming plume boundaries.

Since investigations began in 1996, site characterization has been conducted in multiple phases and has used traditional monitoring wells and a range of additional tools. Direct-push and hand-auger soil sampling was conducted where possible to delineate shallow soil. Traditional hollow-stem auger drilling was used in the saprolite. Air, mud rotary, and core drilling were used in the bedrock. FLUTe liner was used for DNAPL screening. Discrete interval sampling tools, passive diffusion bags, and HydraSleeve samplers were used primarily to provide vertical delineation in the source area. Passive diffusion bags were also used for an instream assessment. Summa canisters and Dräger tubes were deployed for indoor air and soil vapor characterization. Screening-level grab groundwater samples were collected during sonic drilling of wells for reagent injection using the Isoflow discrete-interval sampling system developed by Boart Longyear.

The additional characterization effort associated with implementing the pilot and full-scale remedies resulted in better vertical and horizontal delineation of the plume to focus and refine costs. One significant observation was the variability of the partially-weathered rock zone that separates the saprolite from the underlying competent bedrock. This transitional zone ranged from virtually absent, to as thick as approximately 50 feet. The variability in thickness coupled with higher hydraulic conductivity relative to the saprolite affected groundwater flow pathways at the saprolite-bedrock interface.

These technologies achieved the remediation goal for the unsaturated soil, significant mass removal in the source area, and mitigating further off-site plume migration. Rebound of groundwater TCE concentration in the source area and the residual concentrations following these actions did not meet the overall site remediation goals. An unsuccessful pH adjustment pilot test was conducted as part of a bioremediation assessment in 2009. Subsequently, a design was developed that coupled permanganate in situ chemical oxidation in the source area with ZVI in situ chemical reduction in the plume area. Permanganate offered rapid mass removal in the source, while ZVI emplaced as multiple barriers in accessible locations offered a long-term solution to address slowly desorbing VOC mass in the plume area.

The remedies required quantitative design considerations and modeling, including:

Field pilot tests of ZVI in the plume area and permanganate in the source area were conducted in 2011. Borings were advanced immediately after the injection to assess physical reagent distribution, and groundwater was monitored for two years following the pilot. Based upon the pilot test results, a full-scale design was implemented in 2013.

Source area results for TCE are summarized graphically in Figure 11-1. The baseline represents the condition prior to the 2011 pilot test. Overall groundwater TCE concentrations (through January 2016) have been reduced by >99.9% in 12 of 15 monitoring wells, and at 99.4%, 99.0%, and 73.8% in the remaining three wells. The poorest performance (73.8% reduction) is in a well located within the former tank excavation, and reflects rebound following >99.9% removal immediately after the remedial action. Additional sodium permanganate injection is planned for this location. 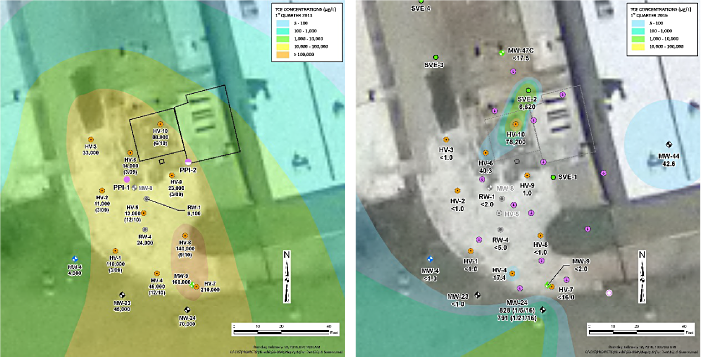 Plume area TCE results are summarized graphically in Figure 11-2. The core of the plume (TCE >10,000 mg/L and maximum of 96,000 mg/L) has contracted significantly, with remaining TCE concentrations <2,230 mg/L. Results for MW-33, the plume monitoring well exhibiting the highest baseline TCE concentration, have been reduced by 99.2% from a maximum of 110,000 mg/L one week after the field pilot test in May 2011 to 905 mg/L in the latest sampling event (January 2016) (Figure11-3). The concentration of cis-1,2-dichloroethene (formed as an intermediate degradation product from TCE) exhibited initial increases from the baseline (<2,000 mg/L) to a maximum of 43,000 mg/L, and have subsequently degraded to 1,650 mg/L. 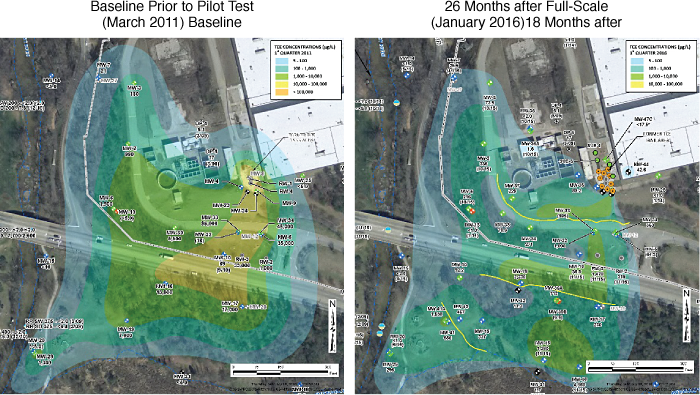 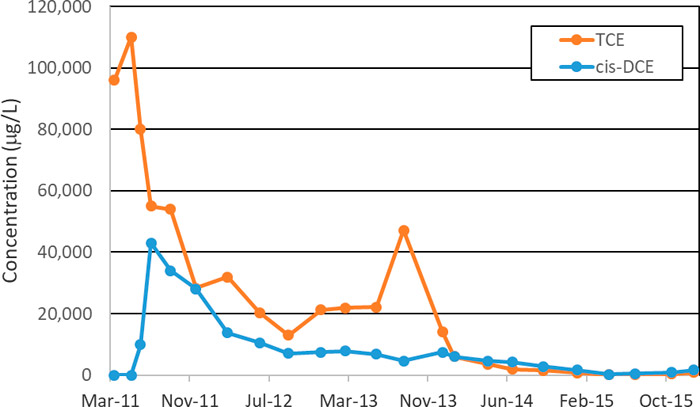 The overall remedial evaluation, implementation, modification, and performance assessment for the remedial actions since 2011 (the permanganate ISCO and ZVI remedial actions) were developed based upon guidance in the Integrated DNAPL Site Strategy document (ITRC 2011). Remedial evaluation began with an assessment of remedial objectives. The absolute objective was to restore the overburden and bedrock aquifer to drinking water standards. Functional objectives were developed based upon a monitoring program to ensure progress, coupled with evaluation to assess if additional remedial action was required. The absolute and functional objectives were SMART: specific (achieve MCLs in groundwater), measurable (groundwater VOC analyses), attainable (based upon modeling predictions and aggressive remediation), relevant (meeting drinking water standards to restore groundwater quality), and time-bound (within 15 years).

The evaluation began with REMChlor and PREMChlor modeling. Plume contraction and decay estimates were developed utilizing site-specific hydrologic, geologic, and VOC data coupled with various source and plume remediation scenarios to determine what levels of VOC mass and flux reductions across the site were likely to achieve the absolute objective within 15 years. Source area remediation coupled with three reactive barriers spanning different zones within the plume area were likely to achieve the objectives. Specific technologies were then evaluated and designed to achieve those reductions, as outlined in the previous sections. Additional site characterization data were collected to refine the conceptual site model, including vertical delineation of VOC concentrations and monitoring well installation to address data gaps relevant to design assumptions.

Pilot test results were used to optimize the full-scale remedial design. Procedures were developed to assess field observations and results daily to continuously refine the site conceptual model and to optimize the design to match site conditions during construction. Ongoing remedy performance and progress towards (or achievement of) the functional and absolute objectives are evaluated with an extensive groundwater monitoring program. Additional injections have been conducted based upon the results to address small areas exhibiting rebound and requiring further treatment.

The large plume area, limited plume access, concentrated source area, and dual-zone (saprolite/bedrock) aquifer system pose special challenges. Results to date have generally met expectations based upon the REMChlor and PREMChlor modeling predictions with respect to source and plume concentration reductions. A few locations in the source area have required additional injection to address rebound, and plume-area monitoring well locations located distally from the ZVI barriers have not yet exhibited reductions because sufficient time (relative to transport velocity) has not passed. Permanganate breakthrough from the source area to one boring location in the closest ZVI barrier has been observed in the latest sampling events.

Remedial designs and objectives are often based on differentiation between overburden and bedrock with little consideration of the transition zone between these regions. A valuable lesson learned at this site was the importance of the partially weathered rock transition zone between saprolite and bedrock. This zone exhibits significant vertical and lateral variability and has a hydraulic conductivity that averages about one order of magnitude higher than the saprolite. The variability required ongoing assessment and remedial design modification during construction.