The 21-Compartment Model is a representation of the CSM at an appropriate level of resolution for communicating the occurrence and distribution of contamination, and can help in making decisions for successful characterization, design, and ultimately remediation toward site remedial objectives. The 21-Compartment Model is intended primarily for fractured bedrock under saturated conditions and can be applied at various stages of characterization and remediation, including, but not limited to:

Visual models, based on site characteristics, provide a logical and fundamental basis for discussion and understanding among all parties involved during the development of a remedial strategy. After the initial compartments are filled in with what is known about the site, the need for more characterization to develop an accurate and usable model for decision-making is often the next step. This model is also useful for presentation of site-specific remedial concerns to other interested parties and stakeholders. The 21-Compartment Model, is not a replacement for the CSM but rather a tool that can be used in conjunction with, and help communicate key elements of, the CSM.

For contaminant mixtures in the 21-Compartment Model, such as chlorinated solvents and fuels (such as gasoline or diesel), these can occur in four phases in the source zone (DNAPL or LNAPL, aqueous, sorbed, and vapor) and three phases in the plumes (per NRC 2005, there is no DNAPL or LNAPL in plumes). Each of these phases can occur in subsurface zones that can be classified as “transmissive” (mobile) or “lower permeability” (immobile).

Table C-1 shows the 21-Compartment Model in blank tabular form. One way to use the 21-Compartment Model is to use qualitative estimates, or ranges, of the potential chemical concentration (or potential) in each compartment as relevant to a particular site. Colors may additionally be assigned to the ranges. Then, mass transfers between compartments can be anticipated as contaminants flow from zones of higher chemical potential to zones of lower chemical potential. The transfers may be advective or diffusive. Table C-2 shows the transfers that are possible among the various compartments.

*Would not apply to contaminants (such as metals) for which there is no liquid or vapor phase.

Note that flux lines shown are intended to convey the qualitative direction of flux, but not the quantitative value of the flux

D.1 CSM and the 21-Compartment Model

Table D-3a fills in the 21-Compartment Model to represent a hypothetical site underlain by uncemented sandstone just after a DNAPL spill occurred. At this stage, the chemical potential in the DNAPL phase is high, and there has been little mass transfer into other compartments. At this early stage of spill site maturation, the mass transfers are primarily from the DNAPL into other compartments. Note for uncemented sandstone that contaminant mass is shown to be present in matrix storage and fracture flow, but also to be present in matrix flow (flow through the relatively porous/transmissive rock matrix associated with uncemented sandstone).

Table D-3b shows the same hypothetical site underlain by uncemented sandstone, but after a period where the contaminants, and in particular the DNAPL, have partitioned to other compartments. This is a middle stage representation characterized by an absence of DNAPL, and increase dissolved phase concentrations. In addition, this middle stage is characterized by matrix diffusion whereby high dissolved concentrations are diffusing into the rock matrix, which later acts as a reservoir of sustained dissolved contamination through back-diffusion.

Tables D-4a through D-4c illustrate the same three stages as applied to a site underlain by shale bedrock. Note for shale bedrock that matrix flow is not present, and these compartments are shaded out as not applicable. Otherwise the progressive partitioning of contaminant mass is similar over time to the uncemented sandstone.

Table D-4c. The 21 Compartment Model for the late-stage spill site underlain by shale.

Tables 5a through 5c illustrate the same three stages as applied to a site underlain by granite bedrock. Note for granite bedrock that matrix flow is not present, and matrix storage is considered negligible. Otherwise the progressive partitioning of contaminant mass is similar over time as compared with the uncemented sandstone.

Table D-5b. The 21 Compartment Model filled in for the mid-stage DNAPL spill site underlain by granite.

Table D-5c. The 21 Compartment Model filled in for the late-stage DNAPL spill site underlain by granite.

For both the sedimentary and igneous examples above, the transmissive zones of early stage plumes contain the highest VOC concentrations in their sources, particularity near the DNAPL phase. For sedimentary rock with significant primary porosity, over time the early-stage DNAPL phase, based on aqueous-phase equivalent concentration, is diminished by advection, biotic and abiotic degradation, and mass transfer into lower-permeability regions ( the matrix porosity) and other chemical phases within the source as well as the plume. In a middle stage, the aqueous-phase equivalent concentrations across affected phases and zones are relatively equal. In late-stage plumes, contaminant concentrations have attenuated in the more permeable (transmissive) zones, and the larger remaining concentrations (again only in the sedimentary bedrock example, but not the case with the granite example that has little or no appreciable matrix porosity) remain in the lower-permeability zones within both the source and the plume.

These concepts are a useful tool to develop objectives for site characterization planning and ultimately can be revisited and refined as with the CSM for later remediation and monitoring. 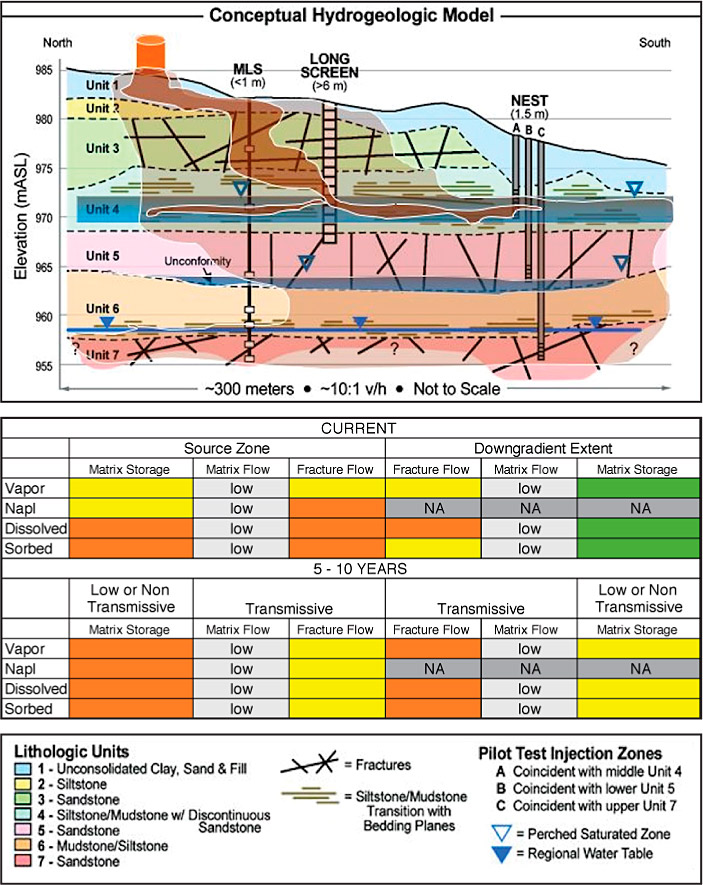 The 21-Compartment Model presents features of the CSM that aid in understanding and communicating how contaminants are moving and changing over time between the different compartments. This model generally divides the source area and extent of dissolved contaminants into areas of high transmissivity (fracture flow, matrix flow) and areas of low relative transmissivity (matrix porosity). The 21-Compartment Model can also be used for screening alternative remedial approaches, or in the evaluation of individual technologies, and as a tool to communicate combined remedy strategies.

As illustrated in Figures D-7 and D-8 (a through d), the 21-Compartment Model can be applied to evaluating remedial objectives, and for technology screening and for the development and evaluation of alternative remedial approaches. A more quantitative approach to perform this evaluation was discussed in ITRC guidance (ITRC 2011) but is not repeated here. The qualitative approach is applied as follows:

In this example, the selection of either a strong and long lasting ISCO reagent, or the use of thermal remediation technology, may be able to meet the functional objectives. Other site-specific factors need to be considered before ultimately selecting the remedial approach for a site, but the use of the 21-Compartment Model provides insight into the potential effectiveness, strengths, and weaknesses of individual remedial approaches.